In this very Hammer like release via Tyburn Film Productions, Peter Cushing stars as an intrepid police surgeon attempting to solve a series of gruesome murders in 19th century Paris. Coming along with Dear Peter for this horrific exercise is director Freddie Francis and Michael Ripper. Both of whom, like Peter, had a long history with the studio that dripped blood.

Beginning with Peter’s narration and a snippet of what appears to be National Geographic footage, a couple are torn to shreds by a pack of wolves. Surprisingly the pack doesn’t kill the small baby boy that the couple were carrying but instead adopt him into the pack. Cut to about five years later and we have our very own wild and untamed Johnny Sheffield running around the woods. He’s a genuine “wolfboy” as Hugh Griffith so aptly puts it when he and his touring roadshow capture the little monster. Hugh knows a dollar when he sees it and promptly places the boy in a cage as part of the act right alongside the tattooed lady.

The years go by and the boy is now a man as played by David Ritoul. He’s also a werewolf when the moon turns full and after murdering his first victim runs off from Hugh’s show finding himself wandering into the slums of Paris and a zoo run by a decrepit and alcoholic keeper and might I add scene stealer extraordinaire Ron Moody. The young man will have a magic touch with the animals and Moody hires him on as an assistant. 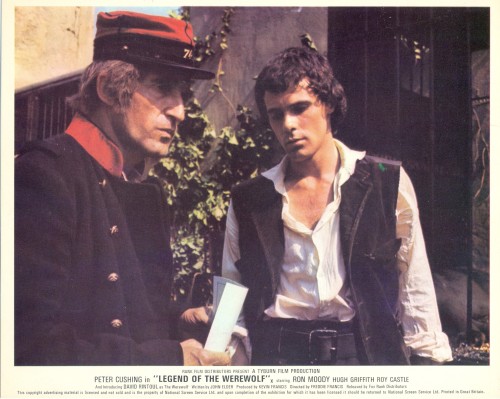 Not surprisingly Ritoul will meet and fall for the lovely Lynn Dalby who spends her lunchtime at the zoo where she befriends the good looking assistant. The problem is she doesn’t actually tell him that she’s a lady of the night and works at the brothel close by. When Ritoul comes calling on payday to take her out dancing the truth will be laid “bare” for him to see. It also happens to be a new cycle of the moon and her latest john is about to meet a gruesome end.

Time to bring Peter into the story and there’s a decidedly bit of black humor to his role as the chief surgeon who isn’t above flaunting organs and dead body parts to snooty members of the political regime. All to turn their stomachs while he enjoys a good laugh. As the bodies begin piling up Cushing is convinced it’s the work of a wolf until one victim claims it wasn’t a wolf before succumbing to his injuries.

Not quite up to the Van Helsing heroics of his youth, Peter looks quite dapper as the crime solver and it’s all rather amusing to see him call upon the brothel as he begins questioning the Madame of the establishment while practically blushing the entire time he’s there. He’s definitely out of his comfort zone in this “House of Entertainment” as he calls it. A bit more of that black humor gets tossed in when Peter is told of the local complaints concerning the victims beginning to ripen at the morgue. No worries, pack’em in ice and open the windows he grins to his assistant. Baron Frankenstein himself couldn’t have handled the issue any better.

Well there is a case to solve and a werewolf to track. For that we’ll need a silver bullet and that’s not going to be a problem with a pro like Peter up to the chase. I’ll leave the rest for you to discover should you be able to secure a copy. I got mine on DVD from Cheezy Flicks but I’ll admit it leaves a lot to be desired. This title could really use a blu ray restoration from the folks at Scream Factory or maybe Indicator. Perhaps a box set of a trio of titles the short lived studio put out at the time. Legend of the Werewolf, Persecution (Lana Turner) and The Ghoul (also with Cushing).

This werewolf production can easily be compared to the 1961 Oliver Reed effort for Hammer. Even actor Ritoul looks a bit like the young pre facially scarred Ollie. Not only that but the make up design clearly seems inspired by Roy Ashton’s on the earlier film. Continuing the Hammer theme, I did mention Michael Ripper and sure enough he appears here as a street urchin looking for God knows what in the sewer systems below Paris and won’t much like what he finds.

Perhaps the biggest reason this plays like a Hammer film is the writer Anthony Hinds once again going by his pseudonym, John Elder. Not surprisingly he penned both films. This one is also kind of a family affair. Oscar winning cinematographer Freddie Francis who is well known among horror fans as a director was in actuality working here for his son, Kevin Francis. The film’s producer and backer of Tyburn Productions. 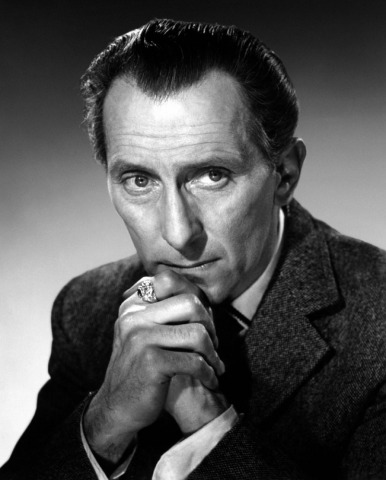 Lastly for those counting this was the 7th of 8 films that actor Cushing and director Freddie Francis worked on together. The others being, The Evil of Frankenstein, Dr. Terror’s House of Horrors, The Skull, Torture Garden, Tales From the Crypt, The Creeping Flesh and The Ghoul.