Not surprisingly, this Italian thriller casts horror icon Christopher Lee in the leading role of the demented Count Drago but what is surprising is that it features the film debut of Canada’s own Donald Sutherland in not one but two roles. That of a Napoleonic policeman and the other beneath a mountain of make up as an old witch eschewing prophecies of impending doom.

Effectively filmed in black and white on the grounds of the real life Odescalchi Castle, this thriller begins with a traveling group of clowns and magicians who following a public showing are invited to perform at the castle for the local Count. Among the group are the lovely Gaia Germani as our leading lady, Philippe Leroy, the dwarf sized Alberto de Martino and a face I recall from plenty of Euro thrillers from directors like Bava and Margheriti, Luciano Pigozzi. There’s a falling out over just how the money is too be split and Pigozzi proves to be a violent tempered partner who is tossed from the group. Court Jester costume and all.

Traveling to the castle the group will run into Donald the Hag who warns them against the journey but to no avail. It’s a spooky entrance to Lee’s castle when the group find themselves in a room full of animals that have been the victims of taxidermy. Lee soon appears with some very unflattering eye shadow and explains that taxidermy is a hobby with him and hints of experiments in the art that should have had the gang scratching their heads and heading back to the pathway and past Donald the Hag. But then we’d have no thriller.

Lee’s got a goon for a manservant who comes off as a young Sid Haig with a long haired wig. He’s an artist himself with a scythe and when the vengeful minded Pigozzi is spotted on the grounds, he’ll discover for himself just how skillful Lee’s aide is with it.

Lee explains to the group that he is the Lord of the lands, a scientist dabbling in the secrets of life and death and fans of Stoker’s novel and Lee himself are sure to curl a lip when Lee points out he’s not drinking wine himself after serving it to the group. When a hangman’s gag goes wrong during the troupe’s show leaving one of their own dead, Donald the cop shows up to make sure there has been no wrong doings and Lee will lead the brigade to the burial grounds.

Not wishing to spoil anything here I believe it’s quite obvious what Lee has in mind for his guests at the castle. He has no intention of letting them leave and as we’ll see during the final reel, he has a place in mind for all of them.

Lee plays his Count Drago straight without the trappings of the vampire. This was a first time viewing for me and aside from a handful of Lee titles that have escaped me, I’ve seen close to his entire catalogue of movies.  I assumed he was playing another vampire of some sort like he would in 67’s The Torture Chamber of Dr. Sadism. Not this time. I will add that I was quite happy to hear his own voice on the track. While the film was obviously dubbed I was worried that Lee’s voice would be as well like it was on the copy I have of his Sherlock Holmes and the Deadly Necklace from 1962. Even Donald Sutherland’s own voice made the film. At least when he’s playing the bumbling officer who is caught up between being an outright comedy relief and a serious inspector for the authorities. As for his performance as the Hag, no idea who is voicing the character. Truthfully, if I hadn’t have read up on the film I would have had no idea it was Donald playing the old hag who will figure prominently in the fade out. 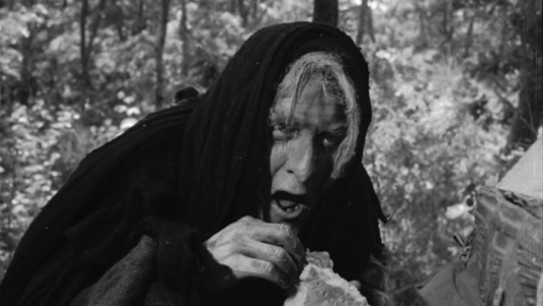 Lee and Sutherland would team again the following year for Freddie Francis in the Amicus thriller, Dr. Terror’s House of Horrors though Donald was still a few years away from stardom. By the time they worked together again in 1980 on Bear Island, it would be Lee working in support of the top billed Sutherland.

Should you ever get a chance to visit Odescalchi Castle be sure to watch out for falling dwarfs! I say this purely in jest because I couldn’t quite believe my eyes when one scene in particular features Lee’s goon and little De Martino going toe to toe atop the castle with near tragic results. 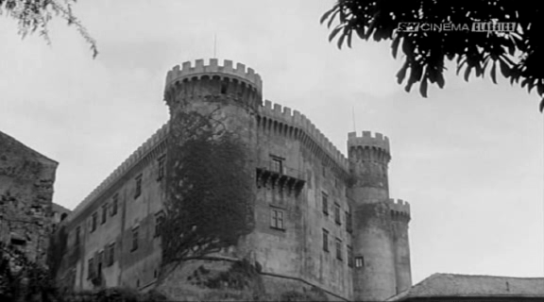 It’s taken me years to finally catch up with this one though I know it was out on VHS back in the days though I suspect the transfer was less than pristine. Thankfully I located a respectful copy last fall at the Monster Bash classic monster fest in Mars PA. Yes Lee’s Hammer outings are far more polished but there is a certain charm to these Euro thrillers so give it a look should you find the time.