One can easily classify watching most any Universal International sci-fi effort from the 1950’s as time well spent and The Deadly Mantis fits right into that statement along with the studio’s other big screen/big monster titles. Those would include Tarantula, The Monolith Monsters, The Mole People and of course a certain Gill Man from a certain Black Lagoon.

With Nathan Juran directing and a large helping of stock footage, this monster sized tail begins in the Arctic Circle where icebergs come crashing into the oceans. One in particular has within it a prehistoric Praying Mantis. Not just any regular sized creature, this one could be considered massive and might be better suited to a battle against the BIG G from Japan in a Toho Vs. Universal two out of 3 falls match for the undisputed bad ass world crown.

Now we all know where this is headed but it will take a while for our on screen heroes, William Hopper, Craig Stevens and lovely Alix Talton to unravel the mystery. It’s a mystery that begins when an arctic radar post is destroyed and the two men that work it disappear. Stevens as a military man will lead the search and find the post in pieces and what appears to be some sort of giant paw prints in the snow. Shortly thereafter a cargo plane goes down and again no bodies but this time a clue. A piece of the Mantis’ exterior shell has broken off and been found in the wreckage. Time to bring in scientist Hopper and his associate/reporter Miss Talton. After hours of research condensed into about 4 minutes of screen time, Hopper believes there might be a prehistoric giant sized Mantis wreaking havoc on mankind. This guy’s good. So good in fact that he’d be hired on as Perry Mason’s personal P.I. on television for years to come.

His suspicions are confirmed at the 33 minute mark when the oversized bug attacks an Eskimo village leaving no one alive. It’s obvious once again that this footage has been borrowed so after a quick bit of research, it’s apparently been lifted from the German film, S.O.S. Eisberg starring the controversial, Leni Riefenstahl. The trio of stars are now off to Greenland and a military base where all hell is soon to break out when the title creature comes looking for a midnight snack.

A scream followed by a condition red classification and the battle is on between the buzzing Mantis and the military for the balance of this 79 minute drive-in special. Following the icy cold battles of the Northern hemisphere, this Mantis is looking for warmer climates and heads to the tropics by way of Washington D.C. where things are going to get destructive. Yes it’s a monster on a big city rampage! Heaven help trains, busses, bridges and blonde’s in a fog.

There’s little doubt that these 1950’s monster flicks will always hold a special place in the hearts of classic movie fans. When the traditional monsters of horror finished their lengthy run opposite Abbott and Costello in 1948, Universal ushered in the sci-fi atomic age with a whole new plate of titles and special effects. The Deadly Mantis being another that caught the attention of the market it was intended for. The teenagers who had money in their pockets to spend and the Jerry Mathers of the world. Who’s Jerry? Look it up.

Graduating from the westerns division at Universal, director Juran would also give us Attack of the 50′ Woman, The Brain From Planet Arous but more importantly work alongside Ray Harryhausen on a trio of iconic titles, 20 Million Miles to Earth, The Seventh Voyage of Sinbad and First Men In the Moon.

While Hopper went on to the Perry Mason show, leading man Craig Stevens would garner cult status on TV portraying Peter Gunn. Long before Star Trek morphed itself into feature films, Peter Gunn did it first with Stevens returning to the role with Blake Edwards directing in the 1967 feature film. Hopper would not only begin his long association with the Perry Mason show the same year as this release but would also appear in the Harryhausen/Juran film 20 Million Miles to Earth. Leading lady Talton has a few credits to her name though nothing jumps out at me. She did however join in with Hopper for The Case of the Long-Legged Models on The Perry Mason show in 1958.

But we all know the real star of the film is The Deadly Mantis brought to us thanks to the special effects team led by Cleo E. Baker and Fred Knoth. 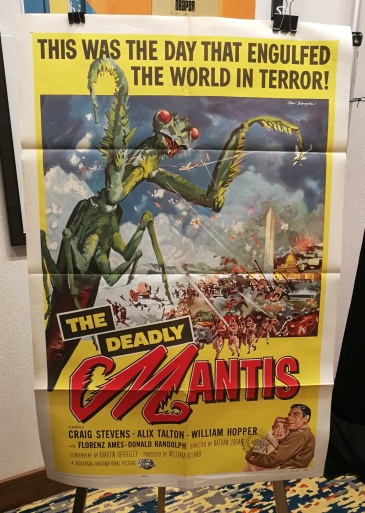 No I don’t have the original one sheet here in the vault at Mike’s Take but I did see one recently on display (though not for sale) at the Monster Bash in Mars, Pennsylvania recently. Reminded me of the film and since I hadn’t seen it in a while, it felt like I was overdue for another look back to the classic sci-fi era of the 1950’s Thankfully the film is available on DVD through Universal’s Home Video division in a box set of classic titles.