From director Eugenio Martin of Horror Express fame comes this delicious tale by way of Spain that places sex or should I say a lack of it and religion front and center as the root of all evil. It’s a tale of two aging spinsters who begin to murder those they deem to be unholy in the eyes of the Lord. As played by Aurora Bautista and Esperanza Roy, these sisters offer up an eerie countenance to those who spend the night in their bed and breakfast located in a small Spanish town where tourists frequently pass through. 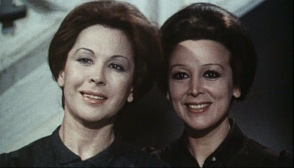 “It was providence. A divine punishment.”

So says Bautista as the aggressive sister of the two who accidently pushes a sun tanning blonde to her death which begins this religious crusade she sets herself upon. Rather than reporting the incident, the camera work infers that she along with the docile Roy cut the body to pieces and burn it to ash in the large oven they keep fired up for hungry travelers. It’s at this point that blonde haired girl next door type, Judy Geeson turns up looking for her sister whom she is to meet at the inn. The sisters claim the missing sister moved on with no word of a destination having left rather suddenly. Geeson is rather surprised but takes them at their word.

Into town comes a busload of thrill seekers that includes a scantily clad young woman booked at the inn who wants nothing more than to enjoy both wine and men while on her vacation. This won’t sit well with Bautista. There’s some heavy Freudian overtones going on here as Bautista enjoys spying on young boys skinny dipping in the local river only to punish herself running through some thorn bushes leaving her bloodied and battered. Things will get a might kinkier when she takes to dressing up fancy like in front of her bedroom mirror.

Her sister Miss Roy is the milder of the two and gets bullied into the murders they are to commit but not without some pleasure of her own. She’s taken up a secret love affair with a much younger man behind her sisters back which allows the producers to feature some on screen sex and plenty of flesh for the drive in crowd. When the latest girl returns to her room late at night, drunk with both booze and love, she’s the next to meet a gruesome demise to the god fearing sisters.

Now Geeson is noticing a trend that will continue with the next woman to take a room at the inn. It’s all going to lead to a harrowing finale for both Geeson and us with a stomach turning discovery added to good effect. All delivered with some fine camerawork from Martin and crew.

This proved to a satisfying shocker with that 70’s Euro feel I confess to being a fan of. Miss Geeson took some time off from the British film industry to appear in this title having just come off Hammer’s Fear In the Night. The film I most associate her with thanks to seeing it at a young age repeatedly on late night TV. Having acquired a copy of this recently on blu ray from Scorpion Releasing, I was more than pleased to see it included a 20 minute interview with Geeson that centered around this production but also allowed her to talk of other films and some of the people she worked with over the years including kind words directed at the Duke, George Peppard, Joan Crawford as well as countrymen, Niven, Attenborough and Caine.

On this production, she seemed to be the “fish out of water” during her time in Spain. I found it rather funny that she had kind words for Bautista who played the evil sister but didn’t exactly go out of her way to say anything nice concerning Esperanza Roy who almost plays it nice though out the film. Apparently it was supposed to be an English shoot but Roy refused to cooperate delivering all her lines in Spanish.

A nice addition to the library here at Mike’s Take and one that I would recommend to fans of those classic Euro Horrors.