This Allied Artists release is a wonderful example of a thoroughly enjoyable low budget sci-fi adventure done right. It’s filmed in color with some wonderful sets on board a spaceship and of a subterranean world and stars genre stalwart Hugh Marlowe alongside a young up and comer who would go on to a highly successful career as a leading man, Rod Taylor. 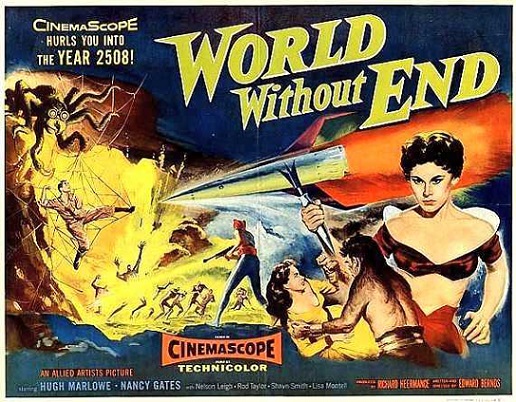 Under Edward Bernds direction, Hugh Marlowe leads a team of four space travelers including Rod, Nelson Leigh and Christopher Dark on a journey to scout Mars. Just as the film gets under way it looks as if they’ve had a successful mission turning back towards home when some sort of storm cloud grabs onto their space ship. In true 50’s fashion the ship is tossed and thrust across movie screens thru space and as the astronauts are soon to discover, thru time as well.

Like a certain spaceship piloted by Charlton Heston, this one has followed it’s trajectory back to Earth and the quartet are shocked to discover they’re home but years into the future. 2508 to be exact and like Heston’s findings, nothings left on the surface of the planet but mutant human beings and an advanced race of humans living beneath the earth’s surface in what can easily be described as a world of rooms and sliding doors not unlike those television viewers will be seeing in another decade on weekly episodes of Star Trek.

Thankfully Marlowe and the boys have brought their Smith and Weston revolvers on this space journey because they first encounter giant spiders and then mutant strongmen in cave dweller furs who are aggressive and come at them with spears and rock clubs. Out come the six shooters. After finding shelter in a cave, they find a doorway to the subterranean world where they are cautiously welcomed though stripped of their weapons.

Not surprisingly, the plot features a group of elders and one in particular who in fine Basil Rathbone fashion, has convinced the others that these men are evil for his own personal gain. Mainly a young woman played by Nancy Gates who in little screen time at all has fallen in love with Hugh Marlowe. As a matter of fact, the ladies of the underworld all seem quite taken with the new boys in town and when the young hunk Rod Taylor displays his bare chest and muscles, he captures the heart of Lisa Montell. This prompts a delicious line from our evil doer, “Our women seem to have lagged behind in their evolution into reasonable creatures. They actually admire these reckless and brutal men. “

Proving that remark, we get to hear actress Shirley Patterson say in response to seeing a shirtless Taylor, “My, you are so much more muscular than our men. ”

Treachery and murder are sure to follow as Marlowe intends to bring his men to the surface to begin repopulating the surface after coming to realize that the underground population is dwindling and the race is dying out. Peaceful though the spacemen may be, it’s time to teach this gentle group of earthlings how to produce weapons and go blow the hell out of the murdering mutants above on the surface. 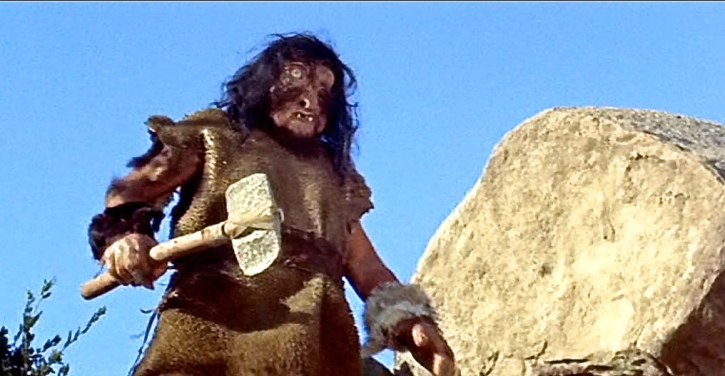 Having just acquired the blu ray release of this title also written by the director on the Warner Archive label, I was very impressed with the film’s condition and can easily recommend it to those who collect 50’s sci-fi flicks. The sets both above and below the surface seem a definite influence on the Star Trek series to come. So much so that I checked into the set designer to see if there was a connection. Turns out set decorator Joseph Kish was not involved in the sci-fi hit on TV but I wasn’t surprised to see he was enlisted to look after the sets on Queen of Outer Space in just two years.

Leading man Hugh Marlowe was a familiar face to audiences in various genres having appeared in Rawhide, Monkey Business and Earth Vs. The Flying Saucers among so many others. As for the young buck Rod Taylor? He would be taking on lead duties in another time traveling adventure, the smash hit of 1960, H.G. Wells’ The Time Machine. A film he has forever been linked to before moving on to playing lead roles successfully in most any genre and displaying a toughness on camera that one can see here in this early outing.

One line that jumped out at me from one of the underground hosts that sadly still resonates today was , “Armageddon. The slaughter of humanity. An atomic war no one wanted, but which no one had the wisdom to avoid. “

Kind of scary to think a line like that is still a topic of discussion world wide 60 years after this film’s production.

A whole lot of fun to be had here so give this sci-fi flick from the glorious fifties a look when the opportunity presents itself.