No matter how many films I’ve seen as the years go by, I still on occasion will discover a new to me title that really grabs me and leaves a lasting impression. Who’d have thought I’d be referring to a movie with such a lurid title as this one from director Emilio P. Miraglia. That’s just what this combination of a Giallo mixed with a dash of Hitchcock in a gothic style and a whole lot of kink did for me upon my watching this title newly restored and released through Arrow Video. A company that continues to impress me with their line of releases and the amount of care and material put onto each disc.

The camera work impresses from the opening scenes as a man is being run down at a hospital for the mentally handicapped. It’s a frenetic pace that cuts to leading man Anthony Steffen whisking a red headed call girl away by car to a deserted and seemingly abandoned estate though the word castle seems just as good a fit. The attractive lady is getting somewhat nervous until finding the inner chamber to be gorgeously appointed and quite comfy. Conveniently there is a chamber of horrors in the next room and the film takes on a kinky sadomasochistic feel when Steffen brandishes a whip and our red headed beauty slips on a pair of thigh high leathers. When the distant Steffen begins to have flashbacks to a naked woman running through the castle grounds to the arms of a lover, he seems to lose his stability and our hired lady of the night is about to experience the terrors of the torture chamber. 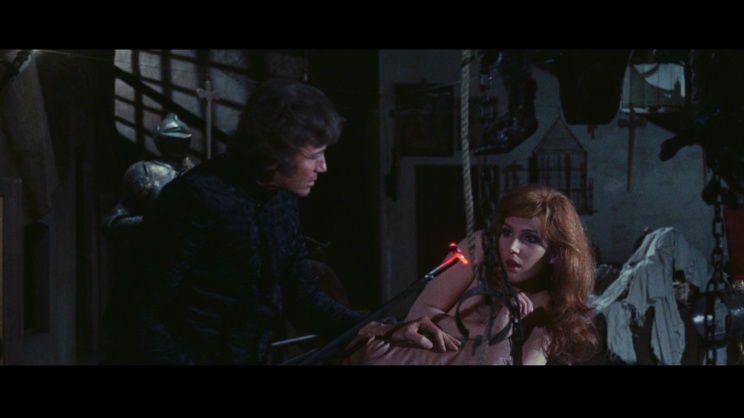 Meeting up with friend and personal physician, Gianfranco Rossi Stuart, we’re to discover that Steffen cannot get past the death of his redheaded wife Evelyn and unbeknownst to Rossi has developed a fetish for lookalikes which can only lead to self destruction. Rossi continues to encourage him to find a new wife and move on. We’ll meet the balance of the family characters when Steffen attends a séance to call forth the spirit of Evelyn. It’s a nice touch to keep the gothic flavor of this thriller flowing.

Next up we’ll have Steffen luring a sultry stripper played by genre favorite Erika Blanc to the castle where she will entertain our leading man in his private chamber until she too comes to realize that the whips and chains will bring no good to her well being in the end. All will seem better for Steffen when he meets and marries Marina Malfatti in a whirlwind night of sex and romance. Hoping to get the image of Evelyn from his mind and stop the dream like flashbacks that are effectively included at key plot points the marriage isn’t going to stop what appears to be the ghost of Evelyn haunting the family castle that Steffen has now taken to restoring in the aftermath of his marriage and rejoining society.

Still to come are crypts, rotting corpses, blackmail and giallo styled killings as family members who may be in line for the family’s wealth plays into the plot.

That’s all you’ll get from me other than to suggest you take a look at this one and tell me what you think if you haven’t already seen it. Either way, I welcome the feedback. Judging by the poster, I think it’s fair to say it was marketed to the drive in crowd of the era and with a few trims, was probably a staple of late night television.

I couldn’t help but compare the flashbacks here unravelling throughout the film with Leone’s use of the device to great effect in Once Upon a Time In the West. They’re well timed here as Steffen relives the past and we slowly learn their meanings from psychiatrist Rossi Stuart. It’s going to become all too evident that nothing is as it seems by the time the final reel approaches. I enjoyed the final twenty minutes of this one enough that I actually replayed it one more time. Not something I do all that often. That alone should tell you I either had no idea what the hell was going on or I just found the final twists and turns deliciously inventive.

Go with the latter choice.

I picked this up via the limited edition box set of 3000 copies that Arrow Video put forth. The film is stunning on blu ray and included in the box set is another title from director Miraglia, The Red Queen Kills Seven Times and numerous bonus features. On the Evelyn disc are interviews and an intro with Erika Blanc. While far from her youthful years she seems to kindly recall the days when she proudly displayed her body before movie cameras combined with fond memories and entertaining stories to relate of working with leading man Steffen and the castle where the filming took place. There is an audio commentary as well that I haven’t gotten to from Troy Howarth, an interview with critic Stephen Thrower and the original Italian theatrical trailer. Should you get a copy of the box set titled Killer Dames, there’s an informative 60 page booklet included with essays on both films in the set and accompanying photographs. 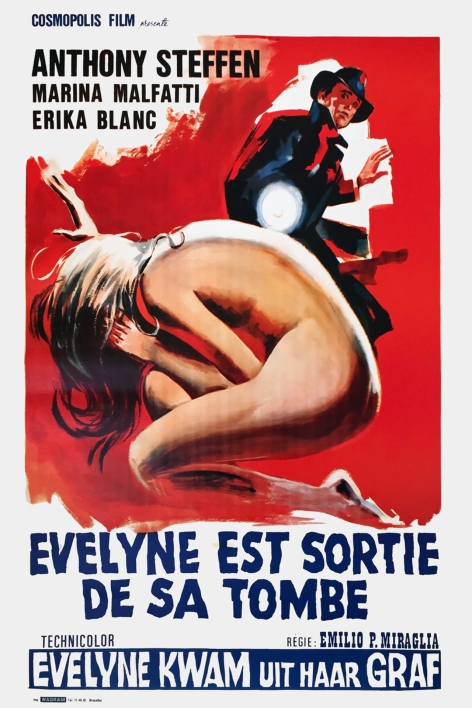 I found Evelyn impressive enough that by the years end, I won’t be surprised if I look back and list it as one of the more surprisingly enjoyable films I happened across this year. Can’t wait to give the second film in the set a look as well as other Giallo entries beyond the world of Argento.