Kristina over at Speakeasy has placed this Jacques Tourneur film on top of my viewing pile nudging me to see it for the first time. It offers screen beauty Hedy Lamarr entering the realm of mystery and a very Hitchcockian themed thriller before film goers might have even used the word to describe a certain genre or type of plotted film. 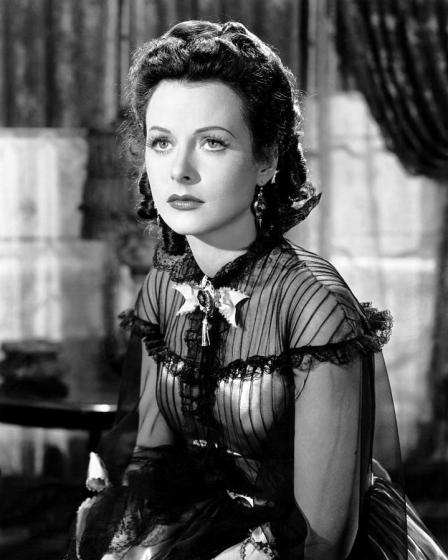 Riding a train in 1903, a mysterious story will unfold for travelling doctor George Brent. While on route to his home town through a raging storm that offers some good F/X, he’ll make the acquaintance of Olive Blakeney. She too is returning home after a five year absence and freely tells Brent of her well to do family and begins to draw him in to her world of characters. He will see to it that she has a room for the evening of their arrival but news of her sudden death when visiting her family will soon reach Brent. A mystery is in the air and when Brent’s pal and artist Albert Dekker talks of the high society family he only adds to the mystery by talking of the beautiful woman who lives there and the painting of her that hangs in the local art gallery.

Brent of course will go to see the painting and from there, have Dekker introduce him at the next social gathering to Paul Lukas and his stunning wife, Miss Lamarr. She seems to be lost in her own world and on edge. Her fragile countenance and beauty has captivated Brent and he seeks to cure whatever it is that is ailing the stunning woman that stands before him. There’s an eerie quality to the proceedings and if I didn’t know any better, I’d think that our director Tourneur was once again working for producer Val Lewton and about to unleash some haunting tale of horror upon the film world as they had with 1942’s Cat People.

It’s about to get even weirder when Brent finally gets a look at the young son of Lamarr and Lukas. I wasn’t sure what to expect as the child has been kept off screen far too long. What comes isn’t a visage of horror but it’s the tale of witches and evil that Lukas is telling to the toddler that raises the hair on one’s neck. Like many men inside Lukas’ circle, Brent to is falling in love with Lamarr and Lukas seems far to cool at the knowledge that most men get caught in her web of good looks and fragility.

A flashback sequence from the pen of the deceased sister’s diary will help Brent unlock the mystery before him and lead us to an exciting climax that will unveil all for those of us who have got caught up in the gloomy goings on in the Lukas/Lamarr home.

Hedy who had long been a project of Mr. Mayer’s over at MGM found herself on loan out to RKO for this mash up of a Hitchcock and Lewton  styled thriller. It has a Gaslight feel to it while at the same time an otherworldly chill only enhanced by the spell of witches that Lukas casts upon us. I really wasn’t sure which direction this was going to take me during the final reel.

This black and white thriller comes across as a sleeper hit. One that might not have garnered much attention but over time has probably gained in status. Not uncommon with titles associated with director Tourneur. Still in his future were the Noir classic Out of the Past and the terrifying Curse of the Demon.

A nice pick thrown my way as Kristina continues to broaden my viewing habits. Now it’s time to take a look at an Oscar winning performance I sent her way. It stars an actor I never paid too much attention to growing up as his roles weren’t as flashy as some other actors for a young kid where as now I look for anything he has worked in or thankfully still blesses us with.