Film history can play funny or perhaps even cruel tricks on stars from the past. I’ll grant you that Jayne Mansfield may be the star of this black and white British flick that pushes the boundaries of sexual content one might have expected to see on cinema screens in 1959 but the hips and curves of the blonde bombshell are not the reason for my securing a copy and viewing it for the first time. That distinction goes to the fourth billed and from our point of view looking back, cinema icon Christopher Lee’s participation. 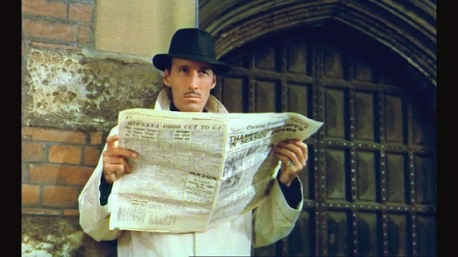 This risqué film from director Terence Young features Miss Jayne as the headline striptease artist at The Pink Flamingo nightclub. The man she loves owns and operates the establishment as played by longtime thespian, Leo Genn. Looking dapper in suit and tie is the club’s manager, emcee and all around bully, Christopher Lee. Flesh is freely on display here for the male going audiences of 1960 provided the film wasn’t banned or heavily trimmed by the censors. Jayne and Leo hold regular tryouts for the ladies bold enough to parade about in nothing but a scantily clad birthday suit. In walks a young, top heavy and blonde haired Barbara Windsor looking for work. She instantly catches Leo’s eye though Jayne warns her lover that Miss Windsor isn’t of age. Genn flagrantly brushes that minor detail aside.

For a low budget feature, there are plenty of plot developments ignited within the confines of the Flamingo. A newsman essayed by Carl Boehm will have free reign to do a story on the ladies who operate on a nightly basis for the mostly over 60 all male crowd. Talk about a bunch of old geezers getting their kicks to the site of Jayne doing a sexy dance routine with plenty of hip and breasts begging to climb out of her corset. Gives me pause to wonder if that’s where you’ll find me twenty years from now because judging by the number of men filling the seats, it’s an obvious choice of entertainment for the retirement crowd.

While Boehm is conducting interviews and falling for one of the young ladies working the nightly gigs, Genn is being blackmailed for past sins and along with Lee sets out to catch the culprit with Jayne acting as the go-between. The trail is going to lead to another club and group of competitors in the nightly sex trade. Surprisingly for a film of the era, Genn clearly acts as a pimp, procuring young unsuspecting women for one of his rich elder clients. Poor Miss Windsor is about to learn the realities of the sex trade despite constant warnings from the world weary Jayne.

I’m no expert on the career of the Miss Mansfield but I would suggest that just a short time after her string of 1957 titles including a co starring role opposite Cary Grant in Kiss Them For Me, her film career was clearly headed down hill by this time. The tragedy that was to follow with her fatal car accident has perhaps given her that mystique that we so often associate with stars who die young and or tragically. Jayne gets to do a couple featured numbers here for the fans, both dancing and singing while playing the dramatic scenes in fine fashion opposite Genn and in her shots as den mother to Windsor.

Barbara Windsor should be instantly recognizable if you’re a fan of the Carry On series where she regularly played the object of Sidney James affections for many a film. Leo Genn who had been in films since before WW2 would actually go on to costar opposite the now leading man Christopher Lee in 1970’s The Bloody Judge. Then of course there is Lee himself who is perfectly suited to his role of backstage thug and one not to be trusted despite not wearing any bit of monster make up and or fangs. He’s still just as deadly as ever.

Also known as Playgirl After Dark, this Mansfield film casting her as Midnight Franklin is out on DVD from the Koch Vision  company. A must for Jayne’s fans and the Christopher Lee collectors world wide. The copy on DVD is black and white though it would appear as if there is a color print available as well. 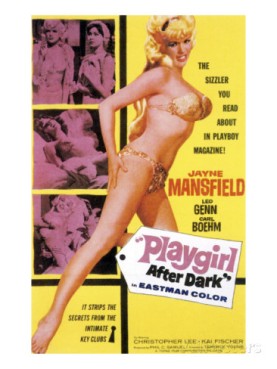 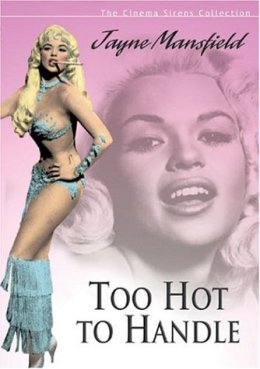