While I’m not sure exactly why, I had somehow expected a screwball comedy going in to this feature starring Robert Montgomery as the title character. The opening scene did nothing to dissuade me from that same line of thinking where Montgomery has holed himself up in a hospital bed for some self diagnosed rest with Harry Morgan acting as his press agent and all around jack of all trades. There’s a long line of would be writers hoping to get into see him as he’s a famous Broadway producer who can make or break careers. When John Payne walks in, Morgan shuffles him to the head of the line and into the see the man with the Saxon Charm. 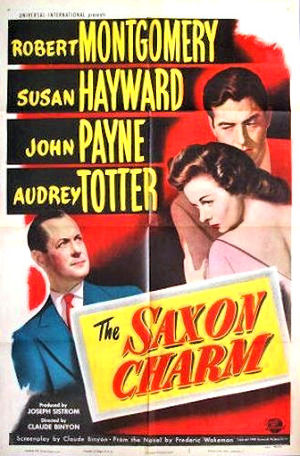 The movie’s title is a play on words as Montgomery stars as Matt Saxon. Into his life comes a young playwright played by Payne and his wife, Susan Hayward. Monty wants to produce the Payne story and turn it into the hit of the Broadway season. From the moment he coaxes them into his world, Montgomery is making himself out a first class jackass. Hayward sees where their association with the producer is headed and would prefer her hubby look elsewhere for a producer. Payne is swept up in the dream of making it to the big time and slowly begins to sacrifice pieces of his identity and his self worth to achieve his dream through the rude, obnoxious Monty who will demand everything of Payne and give him nothing in return. 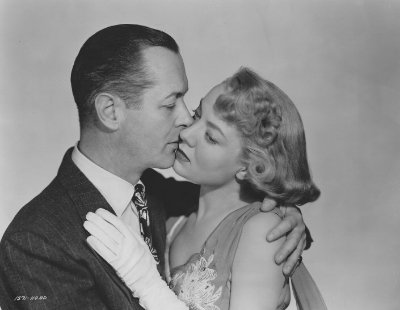 It’s at about this point that I’ve realized this isn’t going to turn into a screwball comedy thanks to one of the most obnoxious roles of Montgomery’s career. There’s nothing redeeming about his character and his nature towards self destruction which is all too evident in his treatment of the one woman who loves him. Audrey Totter appears as that poor unfortunate soul who stands by her man until she finally makes good in Hollywood only to have her own dream come crashing down due to the cruelest of rumors set about by the S.O.B. that is Montgomery.

Payne and Hayward make for a nice on screen couple trying to make good and fighting through their marital discord brought on by the demands imposed upon Payne by the overbearing producer. As dramatic as the film turns at key points in the plot, it seems as if that screwball comedy keeps attempting to surface, mainly due to the character players who pop up from Morgan’s agent to Chill Wills as Montgomery’s yacht Captain and Kathleen Freeman even popping in for an appearance. It’s this trio that keep some scenes lighter than the rest which in the end hurts the overall impact of the film. Not that I don’t like this trio, I’d rather they have gotten their way and turned the whole Universal International production into a Broadway farce as opposed to the downbeat heart of the whole endeavor.

The film was the first of only a handful directed by Claude Binyon who primarily served as a screenwriter with titles like Holiday Inn and My Blue Heaven to his name while ending his directorial career with 1953’s Here Come the Girls.

Not a bad film, just not what I expected going in. Payne I’ve come around to more and more these last few years and I’ve long been a fan of the tough redhead Susan Hayward. It’s Montgomery’s character that proved so hard to like that it effects my overall judgement of the film. I guess we could maybe chalk that up to a solid performance. If we do than in reality it’s too good leaving me feeling it’s not a film I’ll revisit anytime soon.

Have you seen in? I’d welcome anyone’s opinion in the hopes that they might shed a different “take” on this black and white rarity.