If one were to go strictly by the cast list and noticing this film was directed by John Huston, then surely excitement would be in the air. That’s how I felt upon seeing this film for the first time years ago as a young teen. I’ll have to admit to being disappointed at the time when the final minutes passed and no Burt Lancaster, Tony Curtis, Robert Mitchum or Frank Sinatra. On top of that, very little Kirk Douglas. Here I am rewatching it years later for only the second time and rather enjoying it as I’m in on the gag and thinking surely all my favorite actors who participated in this novelty masquerade party had a bit of fun in the making of this black and white mystery.

Under heavy make up credited to Bud Westmore, the movie opens with a shadowy figure setting up an “accidental” death via an elevator mishap. Shortly thereafter another man in obvious make up as a minister is seen checking in at an airport. The luggage makes the flight but the minister is nowhere to be seen at boarding time. A bomb goes off killing the intended target and sending the plane crashing to the ocean depths.

It’s George C. Scott under a mustache and British accent who as a retired MI agent is called into the case by the friend who was the targeted “hit” aboard the flight that has now taken his life. In his possession was the list that has found it’s way to Scott’s hands. Research is telling Scott that someone has been killing off the men who’ve made the List of Adrian Messenger. The mystery of just who is doing the killing will be revealed when the heavily made up man who has sabotaged the airplane removes his false eye covers and pulls the rubber adhesive from his face revealing the cleft chinned Kirk Douglas. He’s the bad guy this time out.

“Evil does exist. Evil Is.” 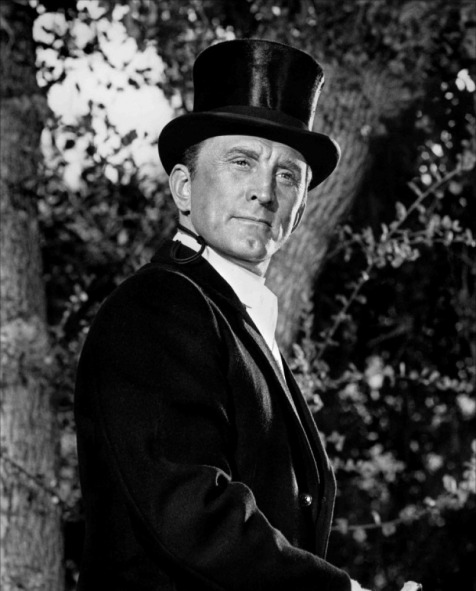 The inquisitive Scott is quick to learn that all the men on the list have been victims of accidental deaths over a number of years. The mystery lies in the fact that the men were all Prisoners of War and the possibility remains that one of the men in the troop was an informer in the camp. Scott has the name but not the face of the mystery man. Pursuing the names and their whereabouts on the list, Scott comes to find a wheelchair bound boozer who claims to have been the brother of the man Scott seeks. Scott might be fooled temporarily but the knowing audience might recognize the voice beneath the heavy make up as one of our guest stars. They’ll also spot Kirk Douglas under a new look closing in to send that wheelchair bound guest star to a watery grave in the local river.

Taking part in the English countryside at the estate of Clive Brook, Kirk will appear sans the make up as a long lost relative to a the Brook’s family estate with motives on his mind. It’s here that Scott will meet Kirk and believe he’s found his man. Now all he has to do is spring the trap before Kirk does the same to him first to keep his secrecy intact.

The final showdown between the two on a fox hunt is a nifty bit of sleuthing by Scott and he turns the fox hunt into a “Kirk Hunt”.

For my second go around, I found the film far more enjoyable knowing what was going on with the special guest stars. Knowing where to look as an adult, the film has a Dick Tracy feel to it due to the make up splashed about on our hidden icons of cinema. John Huston who had at this time been living in Ireland apparently filmed part of the movie at his countryside home and makes a cameo during the fox hunt. Turn your eyes away from the TV for a couple seconds and you might miss him but there is no mistaking his one of a kind voice when he speaks a couple lines. 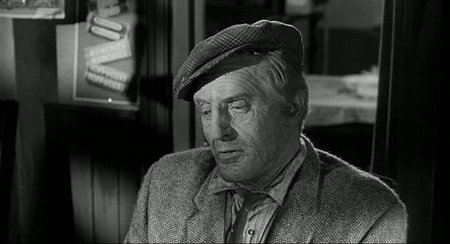 The film is more of a curio in the careers of all involved. Douglas is in the film a fair bit but hides his face a good portion of it, his pal Burt might have you fooled to the end as I’m sure Tony and Frank will. It’s Mitchum whose hidden role is slightly larger and easier to spot. If one is looking for the nasty side of George C. Scott to lash out at someone here, you’ll be disappointed as he plays it quietly while deducing this tale of murder and deceit.

Also turning up are the lovely Dana Wynter, Herbert Marshall and for a brief moment Bernard Fox who would soon become a well known face on American television thanks to recurring roles on Bewitched, Hogan’s Heroes and Andy Griffith. 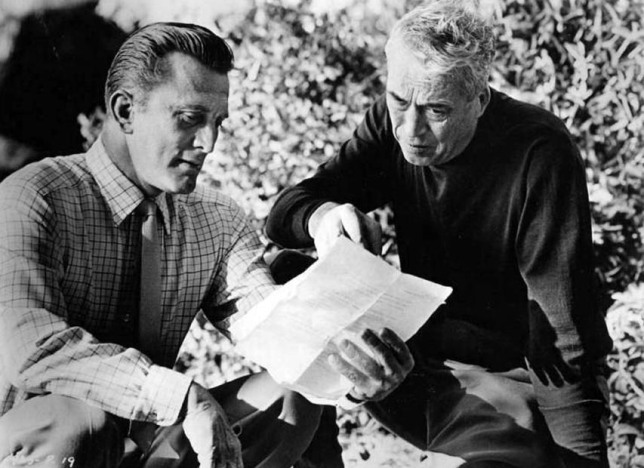 In his autobiography, Kirk seems to feel the film was ultimately a disappointment ( a fair assessment I think ) but includes the trivia that also slated to appear under the make up of a grizzled sailor at one point was the beautiful Elizabeth Taylor. Obviously this didn’t work out as planned and though he doesn’t come and say it outright, I think he may have been disenchanted with his first and only time working with the legendary Huston as director.

Thankfully, List of Adrian Messenger was included in the recently released Kirk Douglas Collection from Universal. A movie that features a group of guest star actors who all passed through Kirk’s career at one point or another making it a fun endeavor for the fans. For more on Kirk, click here…………..