aka John Carpenter’s The Fog

Upon a long awaited revisiting of John Carpenter’s big screen follow up to his phenomenally successful Halloween and the tale of Michael Myers, I realized The Fog is no where near the grotesque, effects laden film I somehow remember it to be from my early years when I first discovered the film in the days of the VHS rental. Maybe I’d seen some gross out snapshots in magazines like Fangoria at the time that have stayed in my subconscious all these years keeping that belief alive. 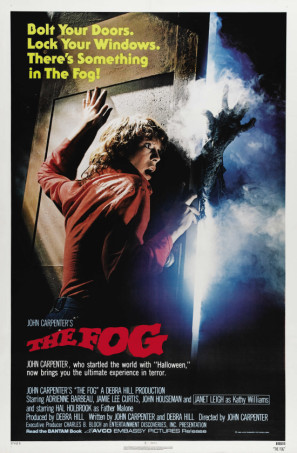 “There’s something in the fog!”

Producer turned actor John Houseman (not unlike John Huston) begins our ghostly tale as an old sea dog sharing a story with a group of youngsters around a campfire down along the sea shore. It’s the tale of the Elizabeth Dane and it’s sinking and those that sent her to the bottom of which the reasons why will be slowly unveiled at a later point in the script by modern day Minister, Hal Holbrook.

It’s the anniversary of the sinking that sets Antonio Bay, an ocean side community firmly in the direction of “The Fog.” Adrienne Barbeau hosts an all night radio program from a cliff side light house and witnesses a bright mist moving inland. Caught up in the Fog’s path is a fishing trawler where the three men aboard are about to meet the zombie like creatures that are vaguely visible in the mist. The three men are not long for this world and it’ll be Tom Atkins and a young hitchhiker he picks up played by Carpenter’s returning leading lady, Jamie Lee Curtis who stumble on the trawler with the inevitable scare jumping out at poor Jamie Lee.

Hal Holbrook discovers by ghoulish intervention the diary of the Minister who guided the souls 100 years earlier and the story behind the sinking of the Elizabeth Dane. Holbrook explains to one of the leading ladies of the community played by Miss Janet Leigh that the town’s forefathers were clearly murderers and it was because of them that the Dane crashed and sank upon the rocky shoals just off the communities shore line. 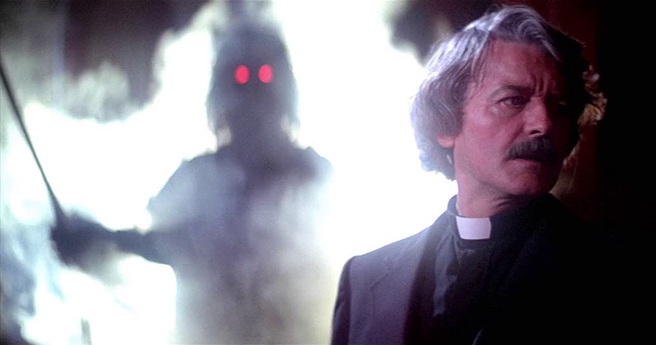 Plot wise, that’s pretty much it. With a Night of the Living Dead feel, the fog rolls in and with it the outlined bodies of what one assumes to be the sailors and condemned souls aboard the Dane. There’s a definite religious backdrop to the story with Holbrook and the church where not unlike the Romero classic from 1968, this film’s leading players will take refuge as they attempt to last out the night and find the key to freeing themselves from the curse of the ghost ship.

Carpenter’s film is really a joining of the old fashioned ghost story mixed with the modern horror film of the era that he himself had a major influence in establishing with Halloween. No classic but ultimately an effective thriller that gives the viewer some great shots like the Elizabeth Dane sailing past the fishing trawler near the start of the film. It’s rather obvious that Carpenter had a larger budget to work with here than his previous foray into the genre. It’s a location shoot of various California locales that include the breathtaking view of Barbeau’s light house radio station. A cast of up and comers mixed with established “faces” like Holbrook and Leigh give the film some added  weight in the genre.

Despite my recollection of ghastly images, this is a film that focuses squarely on what isn’t seen in the fog thereby leaving plenty to one’s own imagination.

There’s plenty of trivia and connections here with the most obvious being that scream queen Jamie Lee Curtis is acting on screen with her famous scream queen Mom, Janet Leigh of Psycho fame. Jamie had made headlines right alongside Carpenter in the box office bonanza that Halloween turned out to be. If you happen to shell out the cash for the recent Scream Factory blu ray edition of The Fog, there is a great interview with Jamie and her remembrances of the early days of working with John on both Halloween and this follow up. 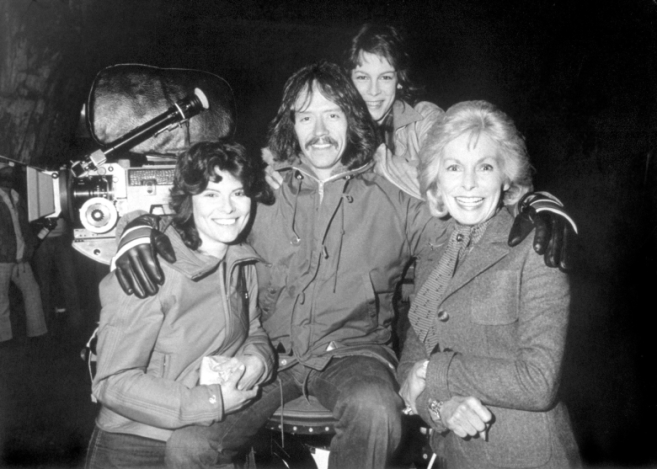 Tom Atkins is pretty much associated with the genre thanks to this film, Night Of the Creeps and his appearance in the third Halloween film, Season of the Witch. Senior citizen John Houseman would also appear in Ghost Story shortly after this film joining a celebrated cast of veterans from the glory days of Hollywood. Look fast to see Carpenter make an unbilled cameo opposite Holbrook early on in the film.

A nicely done flick where John focuses the camera on atmosphere as opposed to outright scenes of blood and carnage.  Pay The Fog a visit over the October season.