Between 1948 and 1950, Roddy McDowall served as a producer on six films released by poverty row studio Monogram that also cast him in the leading roles. He was just approaching the age of twenty. It wouldn’t be until 1987 that he would once again take a producer’s credit on the Kurt Russell/Goldie Hawn film, Overboard. A winning comedy in which he also costarred alongside the famous couple.

1948 saw the release of Kidnapped, Robert Louis Stevenson’s tale of a young man in 1751 Scotland. Young and orphaned, Roddy finds himself journeying to an Uncle’s estate to claim his inheritance. The Uncle has other ideas in mind and promptly has his young charge kidnapped and sent to sea aboard villainous Roland Winters vessel. With his life in peril, Roddy throws in with Dan O’Herlihy and stands up to Winters and the psychotic Jeff Corey before fleeing the ship.

He may be but a lad yet he’ll soon find himself a wanted man due to his association with the rebellious O’Herlihy. Along the way the two will pick up a lovely lass played by Sue England which allows for the youngsters to engage in romantic thoughts. Roddy’s intent is to travel back to his Uncle’s estate and claim what is rightfully his. It’ll be a long journey with the evil Winters and Corey rearing their nasty heads before Roddy and company can right the wrongs bestowed upon him in swashbuckling fashion.

When considering this is a Monogram feature directed by William “One Shot” Beaudine, you may find it surprising that there seems to have been a budget bestowed upon this McDowall production. Unlike the low budget Bowery Boys features or Bela Lugosi thrillers, this effort gives us scope and plenty of outdoor locations. Included in the cast are Mary Gordon and Winifriede McDowall. Roddy’s real life Mother.

I’ve never read the original source novel but think it would be fair to say that this 81 minute production has probably eliminated a fair bit of the novel and it’s characters. It is a Monogram production after all. Still, it serves as a window to Roddy’s career just after he had outgrown the boyish roles of Lassie and Flicka.

1950’s Killer Shark cast Roddy as an arrogant adolescent who journeys to reunite with his father after years of separation. His city boy arrogance is in for an awakening when he sets to sea with father, Roland Winters in the search for shark meat. The early part of the film calls to mind any number of Freddie Bartholomew titles from the thirties.

The film utilizes stock footage of fisherman hauling in their catch while Roddy quickly runs afoul of Winter’s crew. They deem Roddy as soft and the hazing begins. The crow’s nest above seems like an easy climb until young Roddy gets near the top. Sea sickness quickly takes over and it’s Roland to the rescue. It won’t be long before a series of accidents forces Roddy to take command of the ship as part owner. He determines that in order to save the lives of two men, the boat will forgo it’s shark hunting and return empty to port. With no money to split, it looks as if Winters may lose his boat to investors.

Against the wishes of his father, Roddy sets out to become a man and hires a crew of his own led by the shady Douglas Fowley. Roddy will soon see the error in his decision yet by the time this programmer is over, he’ll become a man and make things right. 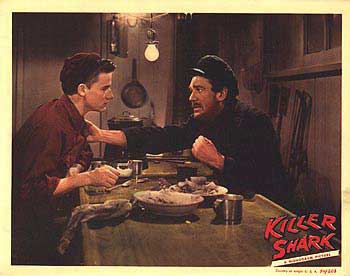 While Killer Shark may be the weaker of the two Monogram titles it’s interesting to note that it was actually directed by western cult favorite, Budd Boetticher. Billed here as Oscar, Boetticher’s work has steadily grown in stature thanks to his association with Randolph Scott while Kidnapped director William Beaudine is but a footnote in films though he did direct an incredible amount of low budget features including camp faves  Billy the Kid Vs. Dracula, The Ape Man and Jesse James VS. Frankenstein’s Daughter.

Boetticher would also direct Roddy’s 1949 produced film, Black Midnight while Beaudine would helm Roddy’s Tuna Clipper that same year. For the record, Roddy’s other two films he is credited on as actor/producer are Rocky (1948) and Big Timber (1950).

Both Kidnapped and Killer Shark can be seen on occasion thanks to TCM. Hopefully they can secure copies of the other four Monogram Productions that Roddy participated in for our viewing pleasure. After all, Roddy is one of only two actors I still refer to as a friend despite never having met him.