This RKO feature can easily be classified as one of those titles I now consider a hidden gem after seeing it for the first time. Thanks to the Warner Archive Collection and happening across a copy at a recent movie fest dealer room in Mars, Pa. it now occupies a spot on my library’s shelf of movie titles.

When journalist Elliott Reid takes a break from the literary world to embark on a fishing trip, he winds up right in the middle of the biggest story he’s likely to ever encounter. Not having any luck fishing, he stumbles and bangs his head on the way back to his car from an isolated area and lake. He gets brushed aside at a local estate when looking for help to bandage a bloodied head and drives into the nearest town finding himself looked upon suspiciously as an outsider.

Carla Balenda is on hand as nurse to her brother’s practice and helps mend Reid’s cut before he settles into the local motel for the night owned and operated by Raymond Burr. Big and friendly Ray tells Reid of the fact that he’s drifted into a ghost town thanks to the trout supply disappearing in the local lakes. Things just don’t seem normal to Reid and he senses a story.

Truthfully the film has that tenseness of Invasion of the Body Snatchers if one looks at it from Reid’s perspective. Everyone other than Carla seems distant and anxious to see him leave town. Reid on the other hand likes the ghost story angle and much to Burr’s chagrin, decides to stick around and do a little digging. Like Tracy in Bad Day at Black Rock, Burr has Reid watched and threatened when he sneaks back to the estate property in the woods where he witnesses zombie like beings parading around the grounds.

Just what is Burr trying to hide? Reid isn’t sure but soon begins to suspect a threat to the people of the United States thanks to the appearance of a Nazi war criminal gone missing since the end of WW2. 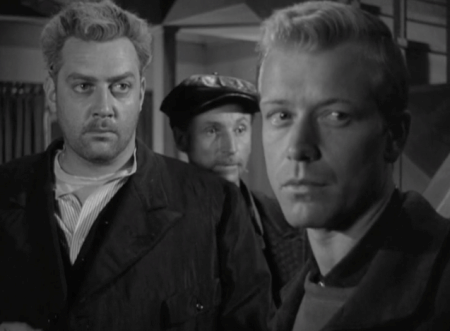 Thankfully for Reid, an elderly store keeper befriends him and lends a hand in his quest to uncover the town’s mystery. “An old fox can always outsmart a weasel.”

This black and white feature from director William Cameron Menzies has much to recommend it. Various genre influences are within this 82 minute feature. At times it comes across as an espionage mystery, a murder mystery with Noir overtones and even has a mad doctor angle tied to it leading one to suspect Boris Karloff may pop up before the final reel plays itself out. Affable Reid makes for a likable hero who finds himself in a dire situation who must deduce what is at stake and save both the fair damsel and his fellow countrymen from the clutches of Burr and his associates.

The presence of Burr practically guarantees he’s cast as a villain at this point in his career and he doesn’t disappoint. Fans of John Ford will be quick to point out Olive Carey turning up in a cameo towards the end where she’s been cast against type. I referenced both the Body Snatchers and Black Rock above but should point out that those films were produced following this feature. I’ll toss another into the mix. I couldn’t help but think of Basil Rathbone and the results of his experiments in The Black Sleep at one point but won’t go any further. You watch and see if you think the same when connecting the dots to other titles.

I’ve tried not to divulge to much of this sleeper as it’s worth getting a copy. Far be it from me to play spoiler.