“Too many jump scares.” 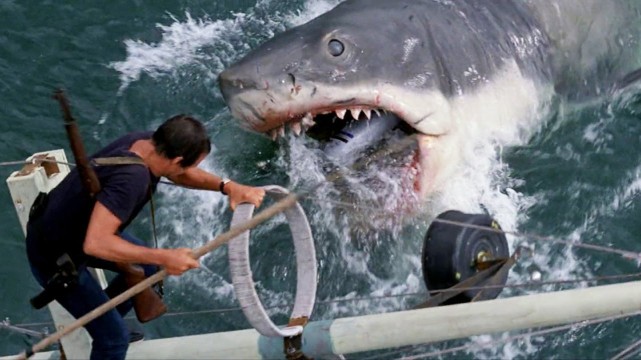 This from a young fellow named Michael who happened to be sitting next to me at my local Apollo Cinema for a recent theatrical showing of a film I have been known to reference as my favorite film at times. The Dirty Dozen being the other. Too many jump scares was the answer he gave me after I asked him if he liked the film. It was his first time seeing it and I must admit that I took great pleasure in seeing him jump when Richard Dreyfuss decided to have a look under Ben Gardner’s boat in the claustrophobic scene that allowed us to to see the size of a shark’s tooth.

For more on my own recollections of seeing the film for the first time and the terror of Ben Gardner’s boat, click here for a movie memory.

Hopefully young Michael will fondly recall years from now the many jumps he experienced on his night out seeing a film that his Mother wanted to share with him.

Truthfully it’s hard to add anything of substance to one of cinema’s most iconic of films. Sure it’s terrifying. In general it’s that fact that many people will recall more than any other when discussing the film. As many jump scares as there may be…..

“Come on down here and chum some of this s–t'”

the film is full of adventure heightened by John Williams amazing score , thrills and comedy.

It’s the comedy that struck me this time. I think it was because I was watching it with a good 100 or more fans. Many were laughing or chuckling at the numerous off handed comments from both Roy Scheider and Dreyfuss. Most of which were directed at the gruff Robert Shaw as Captain Quint or Murray Hamilton as “the mayor of shark city.”

I’ve seen Jaws enough times since childhood to know exactly how the scenes play out and what is coming next. That didn’t stop me from sitting on the edge of my seat and look beyond the focal point of each scene. Try watching Richard Dreyfuss in the background of the movies most memorable dialogue sequence. When Quint tells his tale of the Indianapolis, Dreyfuss sits to the right and looks truly stunned at the history lesson.

It’s also worth noting that this might be the only film classified as a “jump scare” movie that has a dialogue scene far scarier than anything we actually see on the screen that might cause us to shield our eyes. Utilizing a cut and paste job, here is Robert Shaw’s crowning glory in cinema history for you to memorize and attempt to claim as your own tale of terror at the next campfire session.

“Japanese submarine slammed two torpedoes into our side, Chief. We was comin’ back from the island of Tinian to Leyte… just delivered the bomb. The Hiroshima bomb. Eleven hundred men went into the water. Vessel went down in 12 minutes. Didn’t see the first shark for about a half an hour. Tiger. Thirteen footer. You know… you know that when you’re in the water, chief? You tell by lookin’ from the dorsal to the tail. Well, we didn’t know… ’cause our bomb mission had been so secret, no distress signal had been sent, huh. They didn’t even list us overdue for a week. Very first light, chief. The sharks come cruisin’. So we formed ourselves into tight groups. You know it’s… kinda like ‘ol squares in battle like uh, you see on a calendar, like the Battle of Waterloo. And the idea was, the shark goes to the nearest man and then he’d start poundin’ and hollerin’ and screamin’ and sometimes the shark would go away. Sometimes he wouldn’t go away. Sometimes that shark, he looks right into you. Right into your eyes. You know the thing about a shark, he’s got… lifeless eyes, black eyes, like a doll’s eye. When he comes at ya, doesn’t seem to be livin’. Until he bites ya and those black eyes roll over white. And then, ah… then you hear that terrible high pitch screamin’ and the ocean turns red and spite of all the poundin’ and the hollerin’ they all come in and rip you to pieces. Y’know by the end of that first dawn, lost a hundred men! I don’t know how many sharks there were… maybe a thousand! I don’t know how many men, they averaged six an hour. On Thursday mornin’ chief, I bumped into a friend of mine, Herbie Robinson from Cleveland. Baseball player, Bosun’s Mate. I thought he was asleep, reached over to wake him up. He bobbed up and down in the water, just like a kinda top. Up ended him into a raft. Well… he’d been bitten in half below the waist. At noon on the fifth day, Mr. Hooper, a Lockheed Ventura saw us, he swung in low and he saw us. He was a young pilot, a lot younger than Mr. Hooper… anyway he saw us and come in low. And three hours later a big fat PBY comes down and start to pick us up. You know that was the time I was most frightened. Waitin’ for my turn. I’ll never put on a lifejacket again. So, eleven hundred men went in the water, three hundred and sixteen men come out, the sharks took the rest, June the 29th 1945. Anyway, we delivered the bomb.”

Heck, I recall fishing as a kid and eyeing my reel as it clicked with a Robert Shaw glare. Such is the influence of film.

Since I am quite sure I can ramble on and on and lose my direction, I will say that I love to join Roy in the climatic line of the film, “Smile you son of a bitch.” I’m pretty sure I heard a few other theater goers whispering the line at the finale as well.

Thank you Steven for the wonderful movie memories you’ve given me with this film from my boyhood years.

I’ll leave you all with this…..