As the 1940’s came to a close, Olivia de Havilland delivered what surely must be considered her finest dramatic role if not her best  performance period in this William Wyler film. It netted her a second Oscar in four years since winning her first for 1946’s To Each His Own.

In the mid 1800’s New York, Olivia finds herself a socially inept, far from attractive woman of substance. She lives with her overbearing father, magnificently enacted by Ralph Richardson. Seldom does he throw a compliment her way. Instead he’s quick to point out she has nowhere near the beauty, poise or social graces of her Mother, his late wife.

Into their lives and more specifically Olivia’s comes a suitor played by Montgomery Clift. His attentions toward the meek Olivia are well received by her and her aunt, Miriam Hopkins. It’s Richardson who has reservations about Clift’s motivations and the fact that he is attractive and socially adept yet penniless. It is well known in society circles that Olivia already receives a $10000 yearly allowance from her Mother’s estate and will get an additional $20000 annually upon Richardson’s death. 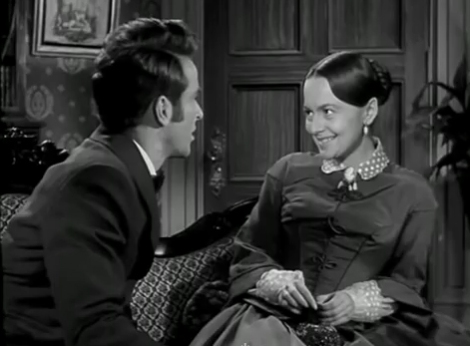 Richardson is far from happy when Olivia announces her intention to marry Clift. Behind her and Monty’s back he questions Clift’s sister as to Monty’s motivation for marrying such a plain looking woman. It’s an intense scene as she reads Richardson as well as he reads Monty. It all leads to a cross battle of words and accusations between the trio of stars.

A decision is made for Richardson and Olivia to take a European trip for six months to see if all is still the same upon their return. 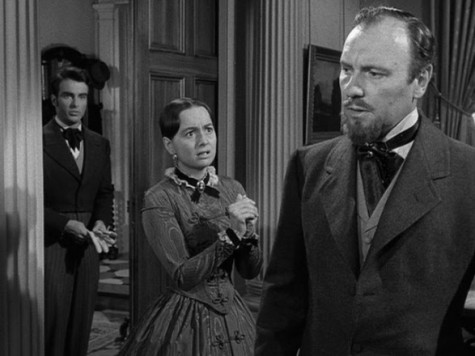 Ultimately a falling out will occur between Richardson and Olivia in what must be considered one of the cruelest scenes of the decade. It’s heartbreaking to see the tenderness and glow of Olivia’s  eyes just fade to nothing under Richardson’s rage and unforgivable insults. In other words, keep the tissue box handy.

In the end, Richardson refuses to leave his money to her if she persists on going through with a marriage to Clift. This alone will prove a test as to Monty’s intentions towards the dowdy Olivia. She fully intends to disinherit herself against Miriam’s objections and may have made her biggest mistake by telling Monty on the eve of their elopement.

This is a film of immense heartbreaking proportions. Perhaps even more so if like me, your a fan of Olivia and the screen identity she’d built up over the past fourteen years. That of the beautiful girl next door that you wish you could call your own. The fact that Olivia has been made to look plain and unattractive almost works. Her eyes betray the character. She smiles with her eyes and can still light up the screen. But as an actress when she dims those lights towards the end it leaves us the viewers in awe of her performance and in tears at what she goes through in life’s search for love, acceptance and ultimately happiness. 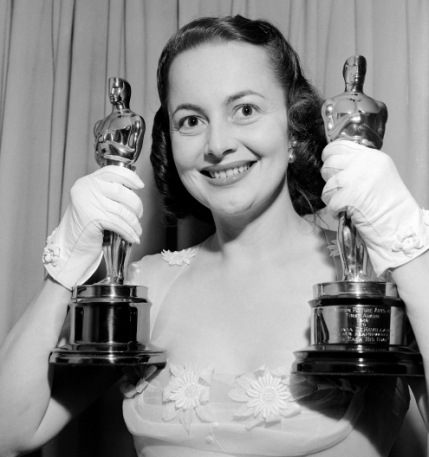 The Heiress was adapted from a stage play that had itself been adapted from a novella by Henry James titled Washinton Square. Supposedly, upon seeing the play, Olivia decided it would be a perfect vehicle for her and William Wyler to bring to the screen. How right she was. The film would win four Oscars. Olivia for Best Actress, Edith Head for Costume Design as well as Oscars for Art Direction and for it’s musical score. Richardson would lose to Dean Jagger for Supporting Actor and Wyler lost out to Joseph L. Mankiewicz for direction.

High intense drama rules the day with Miss Olivia tangling with Richardson in most of the film’s most memorable yet painful scenes. A fine way to end my run of Olivia de Havilland films of the 1940’s.

I can’t help myself here…… if you’ve seen this film as well as Burt Lancaster’s The Swimmer, the imagery at the end is so similar in both films and neither should be overlooked.