Here’s a Japanese import that I believe if it had been a fifties sci-fi thriller from the sound stages of Hollywood and some location shots of Bronson Canyon that it would be as fondly recalled as It Came From Outer Space and other groundbreaking space opera’s of the era. Throw in John Agar, Beverly Garland and Morris Ankrum and voila.

As it is it’s an imaginative import from director Hajime Sato with an unforgettable style to it mixed with red skies and  claustrophobic characters taking on a sense of doom.

A jet liner flying through a red sky is the setting for introducing a group of characters consisting of an assassin, a scientist, an arms dealer, a politician, a psychiatrist, a would be bomber, an American widow as well as the crew of the plane. There’s an eerie feeling in the air when birds begin to smash into the plane in gory detail that sound like eggs cracking for added effects. A blinding light from what appears to be a U.F.O flies overhead and the plane is forced to crash land. Sure it’s all done with miniatures but the overall look and feel to the sequence seems so dead on for the genre.

Tensions rise when the assassin clashes with the crew and passengers. The plane has crashed in a rocky, desolate terrain nowhere near civilization and at gunpoint he flees with a female hostage. Shortly thereafter he encounters a glowing spaceship and in an Alien styled sequence has an amoeba like entity split his forehead open and ooze itself into his head.

Fear begins to creep into the assembled group at the crash and when the assassin returns and is found out to be more then just human the struggle to survive is taken to a new level when certain members of the passengers will gladly sacrifice others to save their own skins.

The assassin has in effect become a space vampire of sorts who is draining the blood from those he corners and kills. There is much of Alien and The Thing mixed in here though they came years later and if one is a fan of those films then you’ll find this hybrid horror/sci-fi flick quite entertaining.  Admittedly though some of the characters and acting are rather juvenile or perhaps a better word is melodramatic. Still one has to look at it as a foreign film that may not play as effective to an English audience at times as opposed to it’s intended viewers.

Goke could easily fit into a sci-fi film fest sandwiched between It Came From Outer Space and The Invasion of the Body Snatchers. It seems to be a by product of the fifties classics with the added effect of color photography and oozing entities with extra blood letting.

I had previously seen this movie about a dozen years ago and hadn’t forgotten it. Having recently acquired a copy through the Criterion Eclipse series it made for a nice revisit. It’s also interesting to note that like the original Japanese version of Godzilla, Goke seems to be carrying an anti-war message to the viewer as well.

On the trivia side I’ve read that the burning red skies of this thriller were paid homage to when Mr. Tarantino used the same backdrop for Uma Thurman’s character, The Bride as she arrives by plane in Japan to seek out Hattori Hanzo as played by Sonny Chiba. 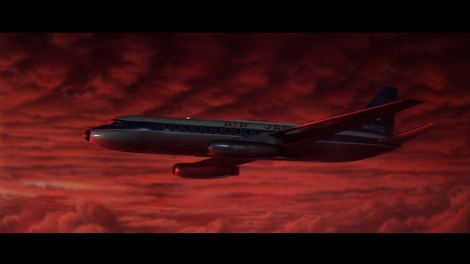 Give this one a look if you love the sci-fi flicks of the fifties. I think you’ll like what you find.

6 thoughts on “Goke : Body Snatcher From Hell (1968) aka Kyuketsuki Gokemidoro”