While not every film from the early days of Hollywood can be considered classics, some are totally watchable thanks to the undeniable star power of Clark Gable and Joan Crawford. Pairing them on screen only adds to the fun.

Attempting to mix comedy with drama this Clarence Brown directed film for MGM excels in the comedic department and gets by on the dramatics.

Young and full of life, Joan opens the film in love with the older Otto Kruger. He’s wealthy and married. The latter creates the biggest problem when his wife won’t grant him his divorce. Joan is more then willing to be his “kept” woman but he insists she take an ocean voyage to think things over. Agreeing, she boards a luxury liner to Buenos Aires. This allows for a very well used plot device during the 1930’s cinemas. The ocean liner romance.

No sooner is Joan on board and the sharks are circling. Sharks meaning the opposite sex like Stuart Erwin who is out of his league and promptly rejected. Erwin hurries off to tell his pal of the stunning cold fish on board. That pal is better known as the King of Hollywood, Clark Gable. Clark quickly goes to work using Erwin as a pawn to impress Joan in a scene that leads to his plot backfiring in a laugh out loud sequence. But it’s going to take more then a first time failure to keep Gable down. When Clark turns up the charm and flashes his million dollar smile, Joan begins to fall for the legendary leading man. 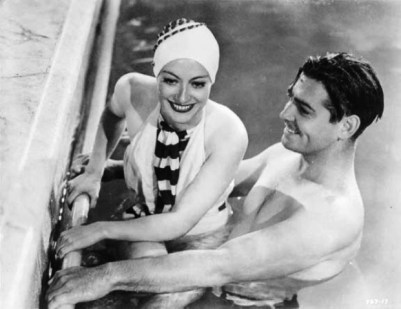 Included in the fun and frolicking on board is a young Mickey Rooney seen briefly in the ship’s swimming pool. When the ship reaches it’s southern destination, Joan parts ways with Clark but he isn’t about to let the her get away that easy. While visiting Clark’s horse ranch the romance blossoms and Joan tells Clark of Kruger back in the United States. She decides to head home and tell Kruger of her finding Gable and this is when the comedy comes to an end and the dramatics take precedent.

Frequent co-stars Gable and Crawford (Love on the Run) were perfectly suited to each other during the 1930’s and their on screen timing and chemistry is pleasantly obvious. At the time of this film’s production, Joan was commanding top billing over Clark but by the time of their final collaboration, Strange Cargo in 1940 it would be Gable’s name that would be featured prominently before Joan’s.

While on their ocean voyage the duo participate in some skeet shooting which was a very popular sport with Hollywood royalty during the thirties and Gable was a regular participant according to Robert Stack who was just a youngster at the time but a national champion who could out shoot Gable and his cronies including Robert Taylor.

It’s sometimes far to easy to picture the Joan Crawford of the late forties and fifties when she went for the look most remember her by and frequently lampoon as Carol Burnett did so wonderfully. Here in the mid thirties she is so carefree and attractive that it’s impossible not to get caught up in her beauty and likable screen presence.

For a look at Chained, it’s available through the Warner Archive collection and worth a peek thanks to the overwhelming star power of Gable and Crawford. I cannot stress enough just how much the film comes alive when the two of them share the camera’s spotlight.

I’ll leave you with the best line in the film, “There’s a look in your eyes that careful Mother’s fear.” This in reference to Gable’s coveting Miss Crawford.