Of the Roger Corman/Edgar Allan Poe cycle of the early sixties, The Premature Burial is the only film not to have Vincent Price as it’s leading man. Stepping in to the assumed Price role is Oscar winner Ray Milland for these devilish proceedings.

“Go away and forget you ever met me.”

Hazel Court doesn’t heed the warnings of the man she loves, Mr. Milland and so begins our tale of a man who is haunted b the belief that he suffers from the deadly ailment known as catalepsy. It seems that Ray is convinced his own Father died of the ailment as well. 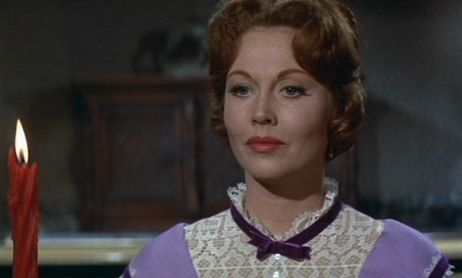 At first Ray shuts himself off from the world until Hazel convinces him that there is a future together. He gives in and the marriage takes place with a loud thundering sky raining down on the proceedings. The wedding celebrations are short when a tune that Hazel plays on the piano causes Ray duress and he storms off from the party. The tune calls to mind that of a melody he recalls a pair of grave robbers humming. The grave robbers are portrayed by John Dierkes and Roger Corman favorite, Dick Miller. They will both figure prominently in the film’s outcome. 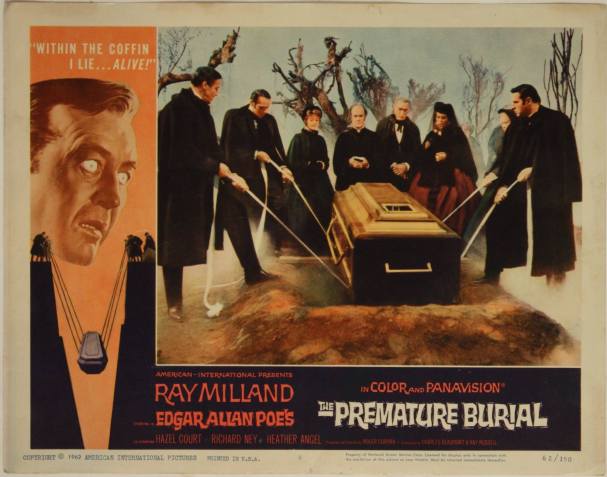 A distraught Ray comes up with an ingenious plan to prevent his being buried alive in a crypt. He custom builds his own with countless pulley’s and levers designed to help him escape should he awake sealed up in his tomb. As a final solution he even has a goblet of poison on hand in case his escape devices all turn in to failures.

There is no doubting that Ray is sure to be found dead at some point in the film thus condemning himself to burial. But the question becomes, “Has there been a double cross?” Perhaps someone has driven him to the grave. In true Vincent Price fashion Ray will rise from the depths of the earth to seek his vengeance on those who would have him dead including the about to become famous Alan Napier as Alfred The Butler in the hit sixties Batman TV show.

This is another glossy Corman film in his Poe series though without the services of Price is easier to forget. Not exactly fair to Milland and company as its thoroughly enjoyable though it is missing something for me without Dear Vincent in the lead role.

Is Ray the victim, perhaps crazy or is he correct in his assertions that he does indeed suffer from the dreaded catalepsy? Catalepsy is when one’s body by all indications is dead yet the person is alive and aware of all that is happening around him. No one can hear his or her pleas and in all likelihood is condemned to being buried alive.

Corman treats us to foggy grave yards and moors with the customary catacombs of spider webbed crypts with low flying bats to keep us on the edge of our seats over the course of the film’s 82 minute running time.

The reasoning for Milland starring as opposed to Price is that Corman had a falling out with AIP meaning James H. Nicholson and Samuel Z. Arkoff over the earlier Price films and the profit distribution. Corman set out on his own this time with Pathe and could not bring Price along as he was under contract to AIP. In an ironic twist of fate, AIP bought out Pathe on the eve of production thus putting Corman back in business with Arkoff and Nicholson.

While Milland did not star in any more of the Poe films, he did do some other titles with Corman and AIP including The Man With X-Ray Eyes and directed himself in Panic In the Year Zero for the production company.

Fun and colorful from an era that continues to capture the interest of new fans discovering the Corman/Poe cycle for themselves.