“An instrument of war. A perfect killing machine.”

A quote like that can come from practically any film of the action genre post Rambo’s 1982 debut in the film First Blood. Fit it does in this, the first of countless Dolph Lundgren action films that have come to us in the ensuing years.

Dolph is playing a faithful Russian soldier who follows orders directly from the Kremlin. He’s to take out a rebel leader on the African continent. In order to do so he’s to run afoul of the Russian militia currently stationed along with their Cuban pals and move in under the guise of being a deserter. In order to do so he must take out a good twenty comrades to convince his traveling companions he really is on the outs with Russian command.

Cussing like a sailor and teaming with Dolph during their desert get away is M. Emmet Walsh. (remember the Stanton-Walsh rule) They’re on the run from the familiar faces of bad ass oppressors Brion James and Carmen Argenziano. These crazed killers in uniforms are not above chemical warfare and destroying any local villages in their paths.

Walsh is playing a war correspondent who on more then one occasion finds it easy to pick up a shotgun and fire a barrage at his Russian enemies. For the majority of the film, he keeps a close watch on Dolph. After all he’s Russian and that makes him an untrustworthy ally. 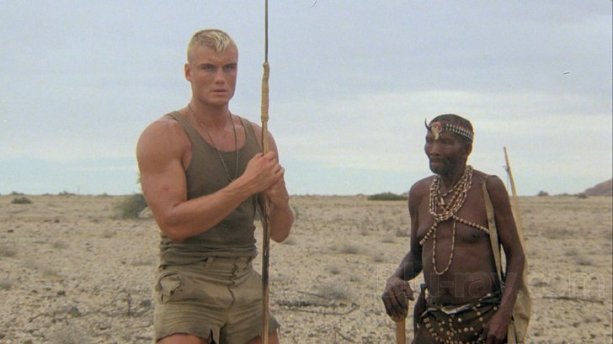 Safe to say that Dolph is going to see who the real villains are? I think so. It won’t be long before Dolph realizes he’s on the side of evil. With some help from a local bushmen tribe and his very own Yoda figure who plants a scorpion tattoo on Dolph’s enormous chest, he is about to turn the tables on the real oppressors. The tattoo can clearly be seen as a badge of honor and acceptance in to the desert tribe.

“Let’s kick some ass.” he says to Walsh and the other natives as he launches in to his version of Commando and multiple one liners in between loud explosions and machine gun fire.

Looking back, this was one of the few films of Dolph’s action career that saw a North American theatrical run. No I didn’t see it in the theater but I clearly recall the commercials for it on television. At the time it looked like a Russian version of Rambo. Turns out it is. But it’s clearly a propaganda piece of film making as well aimed at putting down the Kremlin and the communist war machine.

Totally watchable in the style of those 80’s action films with big muscle bound heroes toting machine guns so large that I am pretty sure would give me a hernia if I attempted to heave one up to my waist line with the intention of shooting from the hip. Like his role as Ivan Drago in Rocky IV, Dolph plays to his strength here which is to say little and look imposing.

Scorpion was directed by Joseph Zito who seemed to be a good choice as he had already worked with another action hero of the 80’s. He directed the Chuck Norris shoot’em ups, Invasion U.S.A. and Missing In Action.

With a rock’n roll soundtrack and “Long Tall Sally” playing over much of the shoot outs, this isn’t all that bad. Sure it’s silly but for outright action and explosions of the real kind (another CGI dig) it’s kind of fun.

Dolph carries such an imposing figure here that one has to ask themselves, “Really? How the hell could Sylvester Stallone knock this guy out in Rocky IV.”