Ask me to conjure up an image of Joan Blondell and it’s the short matronly older lady with blonde hair and slightly bulging eyes. In other words her character Lady Fingers from the Steve McQueen film The Cincinnati Kid. It’s a personal favorite that saw her re-team with her 1936 Bullets or Ballots costar Edward G. Robinson. 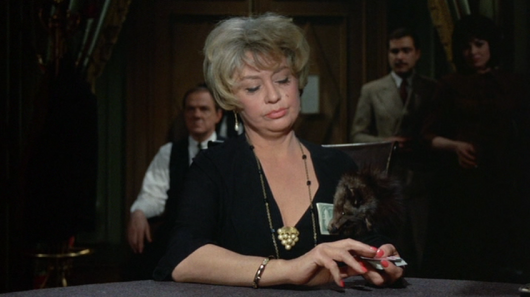 I recently came across this well researched biography released in 2007 and discovered much about a lady who was a performer since she was a small child. Her parents were vaudeville performers so she came by the desire to perform naturally. With the support of many of those she worked with and members of her family, author Kennedy does a great job of weaving her professional career and private life into a very good read.

Joan did of course get her start with Warner’s becoming one of their stable of women performers. Never quite fighting for the roles as Bette Davis was prone to, Joan settled in and had a great run of films ranging from musicals and light comedy to the odd gangland film along the way. Perhaps if she had received the Cagney grapefruit in the kisser she’d be better known for her appearance in The Public Enemy.

Joan would actually get her break performing on stage opposite Cagney which led them both to the Warner’s lot and co-starring in seven films together. She would wind up appearing with many of the leading stars of the day like Stanwyck, Gable, Bogart and perform in a succession of movies with gal pal Glenda Farrell.

I had no idea that Joan would marry her musical co-star Dick Powell in what would be her second of three marriages. Neither did I realize that she was married to showman Mike Todd before his famous pairing to Elizabeth Taylor and his early death by plane crash. Or how about the fact that her brother-in -law at one point was Albert R. Broccoli of James Bond fame!

As a student of the history of movies there is plenty to appreciate here covering Joan’s Warner days as a contract player through her years as a free lancer and ultimately her later years and television work. As is the case with many film stars I had no idea just how extensive her stage work proved to be. Especially in the 1950’s with roles ranging from the Shirley Booth character in Come Back Little Sheba to appearing with actors like Art Carney.

The one characteristic that Joan displays throughout the book is that her film career was really secondary to loving those who she was close to in her life. Her husbands, children and grand children and trying to do right for them all. At times just loving too much I should think.

It’s also comforting to see that those interviewed for the book really have nothing negative to say about Miss Blondell or her professionalism and love for family and work.

While I usually catch myself reading books on the more iconic stars of the past it’s nice to see that Kennedy has taken the time to research Blondell and present us with a window to the past and of a lady whose career proved to be one of an epic length. All the way from The Public Enemy to Grease and beyond.

This look at Blondell’s life and career was released through the University Press of Mississippi and even though we now have the IMDB, I’m happy to report it comes with the all important filmography in the closing pages as well as her contributions to both the stage and television.