When Isaac Hayes won acclaim for the theme song to Shaft in 1971 it only made sense that he would turn up in a tailor made film of his own during the blaxploitation craze of the seventies. He fits the brooding assassin like parts of the film but the less said about his emotional love making scenes the better.

Hayes stars here as a skip tracer. A modern day bounty hunter. He’s got a partner for comedy relief and a girlfriend who can’t stop shop lifting. But when he takes on a job handed to him by Dick Miller his calm demeanor is going to be put to the test.

He’s out to bring back a dangerous offender. It’s a pimp with a loyal brothel headlined by the sadistic and foul mouthed Nichelle Nichols who uses violence and intimidation to keep the stable in line. When she runs into Hayes and co. she tells the two “You don’t look like cops but you smell like them.” From the outset they don’t get along and when Hayes has to put a bullet into her man she swears vengeance and wants her pound of flesh.

With a stable of hard working women, Nichols turns to her masculine competitors and offers up half the profits of her operation to the pimp man enough to take out Hayes. Stepping up to the plate with the appropriately over the top costume design is Yaphet Kotto. He knows the danger that Hayes presents and hires an out of town crew of hit men to take out our title character. 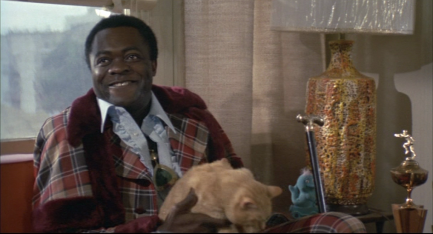 Guns are sure to start blazing and there’s plenty of blood to be splashed across the screen as Hayes takes a vigilante stance after his partner is torn apart by multiple shotgun blasts that were meant for him. He wisely has his girl put out of the way for her own protection in the films one amusing scene. Then it’s back to the gun waving attack on those out to take him down.

Between the healthy dose of blood and the excessive use of foul language from Nichols who is a long way from her Lt. Uhura character this is as hardcore as a blaxploitation flick could get in the seventies without straying into outright pornography. For those that have never really seen Nichols do much other than Star Trek this could be considered down right offensive. More so if you are not familiar with this genre in general. 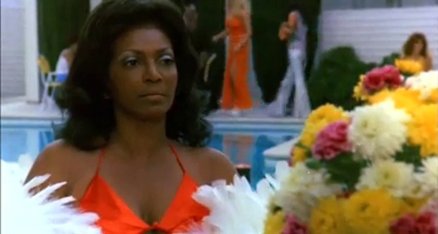 Truck Turner was directed by Jonathan Kaplan for American International Pictures. The company specialized in both the blaxploitation market and any other fad that caught on from the Poe cycle in the sixties to the biker film craze with actors like Bruce Dern and Peter Fonda. Director Kaplan would also give us the cult favorite White Line Fever in 1975 before moving into television on shows like ER. 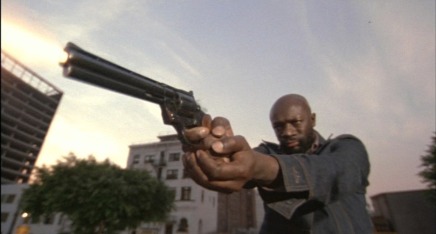 Hayes served as both actor and composer on this one and while he’s nowhere near as good as Richard Roundtree as Shaft he’s never dull. If anything these films serve as a window to the past. No different than the psychedelic films like The Trip and other swinging sixties efforts. Given a choice I’ll take this genre over the psychedelic flicks all day long. We even get Scatman Crothers in here as a retired pimp with one heck of a slicked down toupee.

This one is out on DVD as a double bill with the ultra cool  Fred Williamson number Hammer.