Notorious producer Walter Wanger bounced back from a short stint in prison to begin his climb back to respectability with some low budget B films in 1952 including this Korean war tale.

In case you’re wondering, notorious in the sense that if I catch you fooling around with my wife I will shoot you where you REALLY don’t want me to shoot you. His wife just happened to be leading lady Joan Bennett. The victim was her agent Jennings Lang.

As for this “B” film from director Lesley Selander, it’s the story of a platoon of marines who go in and film the battles for the news reels back home. Not a bad idea to spotlight a script on these fighting men. Too bad it’s mostly pedestrian.

John Hodiak re-enlists to hook up once again with Stephen McNally after they filmed battles side by side in WW2. It turns out that his former flame Linda Christian is now engaged to McNally. As far as Hodiak is concerned, he knows what’s best for her and it’s him. Since she’s a nurse in the Red Cross, she’ll be within the reach of our fighting heroes. 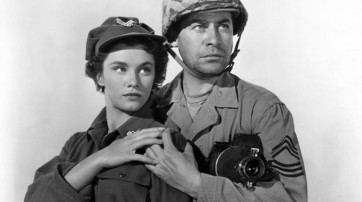 McNally and Hodiak are not only fighting for the best camera shots in the Korean war but are waging a battle against each other for the favors of Mrs. Tyrone Power. McNally begrudgingly admits to his platoon concerning Hodiak that he hopes the rest of them “have the same kind of guts as he does under fire.” They’re about to find out.

The platoon is going deep behind the lines to photograph some strategic areas in the hopes of shortening the war. Coming along on the mission is Philip Ahn to ensure they can question anyone from the North that they may capture.

If only one of our two heroes survive the deadly mission then maybe Linda Christian’s future will be decided by fate as opposed to her preference of leading men.

The film plays like an episode of televisions Combat. It even has a long list of well known faces including Martin Milner of Adam 12, Alvy Moore from Green Acres and Jack Lawson who played Jimmy Olsen on The Adventures of Superman. The biggest name in the film wasn’t quite yet a name at all. If you blink you’ll miss Charles Bronson getting a couple of lines in profile while laying low under fire near the beginning of the film.

The most ironic thing about this film is that it is about the fighting men who captured the battles on camera for the folks back home. Of the film’s 82 minute running time, there must be a good fifteen minutes of stock footage taken by fighting men who risked their lives to capture these same images in real life.

As for Wanger, Riot in Cell Block 11 and I Want to Live! were still to come before Cleopatra ended his producing career in 1963.