Old fashioned entertainment that is impossible not to like from the outbacks of Australia. 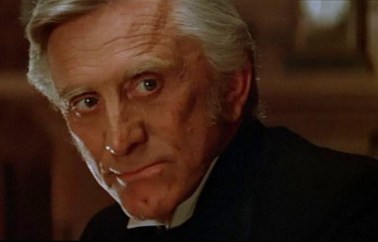 Hollywood icon Kirk Douglas has a field day here in a dual role. One the rich land baron who rules with an iron fist over all things in his possession. This includes his strong willed daughter. The other a peg legged old prospector under a heavy beard who just happens to be the black sheep of the family.

The real stars of the film are the beauty of horses, Tom Burlinson as a young man trying to prove himself after the death of his father and Sigrid Thornton as Kirk’s Tom Boy of a daughter. Perhaps most importantly the location filming highlighting the mountains of Australia.

Burlinson finds himself in the employ of Kirk’s hungry land baron. He’s starting at the bottom. Cleaning the stables and all chores around the ranch house. It isn’t long before he wins the favor of the beautiful Thornton. This won’t sit well with some of the other hands who mean to put the young man in his place. Kirk isn’t fond of the young man either. It seems as if he has a past he’d like to keep secret and Burlinson may be about to unlock it.

In a role that one could actually see Kirk Douglas in we have Jack Thompson as Clancy. An experienced mountain man who knows the terrain and how to work the land. While he’s working for our land baron he champions Burlinson’s young man despite Kirk’s reservations.

Revolving around the plot is the story of a wild pack of horses and how they will move the plot and unlock the mysteries of the past as peg legged Kirk won’t divulge all he knows either.

Circumstances escalate when father and daughter get into a spat resulting in a vicious slap that only Kirk could deliver. There’s no apology here and it harkens back to Kirk’s angry years in films like Ace in the Hole or The Bad and the Beautiful. Thirty years later he was still capable of grabbing viewers by the throat and shaking them. On the other hand Kirk under the beard of the old peg legged prospector allows Douglas the actor to have fun on screen whether it’s fighting the mountain where his mine is or flirting with a cook in the kitchen. He’s delightful.

Pieces will begin to fall in place when our two Kirk’s meet and argue over the past and once again our herd of wild horses will figure prominently in the film’s outcome and whether or not our two young lovers will have a future together. 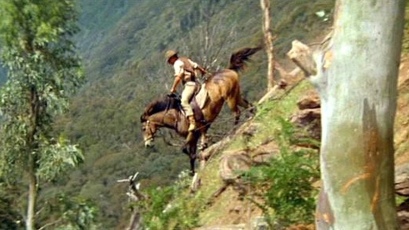 “It’s a hard county. Makes for hard men.” So says peg legged Kirk in a line near the start of the film that was meant for the cleft chinned star. It could have been used in so many of his films over the years. Douglas actually had played a peg legged character previously in his directorial debut in 1973, Scalawag.

This scenic film was directed by George Miller and it would be followed by a sequel in 1988. Return to Snowy River would once again star Burlinson and Thornton but Kirk Douglas would be replaced by Brian Dennehy. 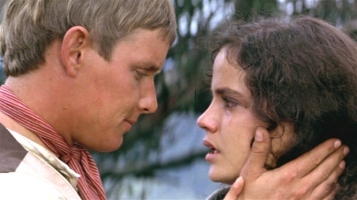 This one is a rewarding experience and makes for fine family entertainment.