Just because Van Heflin was an Oscar winner doesn’t mean that MGM used him exclusively in A budget pictures. In the words of Sam Levene, Heflin is a “Park Avenue Private Dick” this time out caught up in the murder of a beautiful broadway star played by Patricia Dane.

This film leans heavily on the formula of the day with one twist. Most mystery films seemed to have a detective like Chan or Holmes go about solving the case and spend the final ten minutes gathering the remaining suspects into a room and unveil the killer. This time out the script has the suspects corralled by the twenty minute mark and spends the next fifty minutes grilling them which allows for each to give their story via the flashback. There are plenty of characters with a murderous motive to match.

The best thing about this murder mystery might be the amount of faces you’ll recognize but have no idea of what the actors real life name is other than leading man Van Heflin. Sam Levene portrays the police detective at odds with Heflin  over who is actually in charge of questioning the various suspects of which Heflin himself is one. 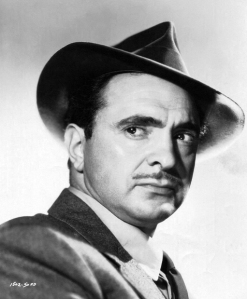 Cecilia Parker is in here moonlighting from the Andy Hardy pictures. Horace McNally is the obvious red herring of the piece. Horace would wisely change his name to Stephen and go on to a fairly successful career in various genres including the western. Millard Mitchell is used for the standard comedy relief character of the murder mystery genre. Mitchell is one of those faces easily recalled from his lengthy career.

George Sanders brother Tom Conway is in here as a nightclub owner who wasn’t to happy with our murder victim Dane as well. Conway was about to become better known in cinemas as The Falcon.

Samuel S. Hinds and Frank Ferguson are the final two faces I wanted to point out. I can’t begin to count how many times I see them pop up. Especially Ferguson who would become a semi-regular on what I refer to as my all time favorite television show The Andy Griffith Show.

This diverting mystery was directed by S. Sylvan Simon who also gave us the Red Skelton trio of Whistling mysteries that are very enjoyable if you get the chance.

Worth a look on a rainy day when your flipping the channels and come across it on TCM.