Here’s a B programmer that spelled the end for the talking mule franchise. 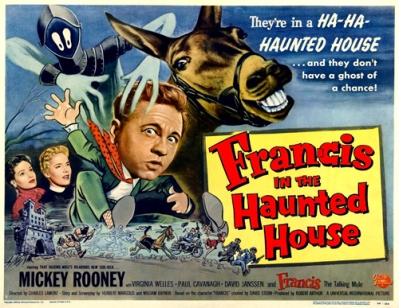 It’s not all that haunting and any talent involved is pretty much wasted. Mickey Rooney steps into Donald O’Connor’s shoes here as the caretaker of Francis. A mule who sounds a whole lot like Chill Wills. The problem this time out is it isn’t Wills at all but a poor attempt at sounding like the well known character actor.

Rooney is targeted here as a fall guy in a series of murders taking place at the local castle that was moved stone by stone from Europe. There isn’t a ghost in sight so I am not so sure where the haunted title comes from. Mickey has his eyes set on beautiful Virginia Welles who has inherited the spooky place.

Hot on his tail is Lieutenant David Janssen. Janssen is making his third appearance in the franchise. Each time out he has been cast in a different role. The series was actually used as a training ground for young actors like Janssen, Piper Laurie and another up and comer named Clint Eastwood among others. 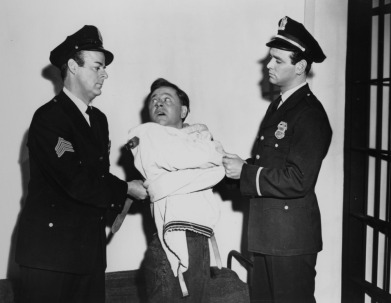 It won’t take you long to see who is really after Welles’ fortune. After all, Paul Cavanagh is her legal guardian. You don’t think that he………nah. I won’t spoil it.

As is the case with most Francis films, there are always a couple of familiar faces. This time we get Richard Deacon as a shady caretaker at the castle who isn’t above wielding a knife in Mickey’s direction. The biggest disappointment might be seeing Timothy Carey turn up in what amounts to a lumbering idiot role. What a waste. Here’s an actor that can be so menacing and when he speaks he just adds to the tension.

With a little help from our four legged star, Mickey will fumble his way to the finish line of this Universal International production from director Charles Lamont. Lamont was under steady employment for the studio during the fifties. He directed scores of Abbott and Costello titles as well as doing some of the Ma and Pa Kettle films. It’s funny the studio never paired Bud and Lou with the talking mule. Seems like a no brainer.

Overall this has to be considered a let down for all concerned. I have heard it said that Donald O’Connor swore off the series when the mule was getting more fan mail than him. True or not, it’s make for a nice Hollywood legend. 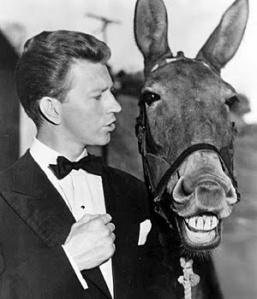 I feel sorry for Mickey here but it’s no secret that he bummed his way through many a film during his up and down career. This may not be the lowest point but it must have hurt his pride taking up O’Connor’s cast offs.

Best line of the movie…..”I don’t want your head mounted in the castle trophy room.” What makes it funny is that it’s the mule telling this to Mickey as opposed to what you may have expected. After all, “What’s so strange about a talking Jackass?”