Once again 20th Century Fox casts one of their strongest box office assets, Tyrone Power in an adventure where swords, sandals and jolly old England play a substantial part.

Essentially Ty is an outcast Saxon in the days when the Norman’s led by King Michael Rennie rule the lands. With a chip on his shoulder due to his inheritance not being what he expects, Ty along with childhood friend Jack Hawkins leave the old country for adventures in the far east. This takes them on a journey that includes stops to meet Herbert Lom, Alfonso Bedoya and having a slave boy assigned to them. Young Robert (Bobby) Blake tags along as our slave boy.

The end result of their travels is winding up in the camp of Orson Welles’ mongol leader. Welles looks like a cross here between Genghis Khan and Charlie Chan. He is a strategist in the game of war. He’s harsh with his enemies and easily hands out death as a discipline. As for Ty, Welles has a huge respect towards our English Saxon who plays war by a code of chivalry as well as gallantry.

The Black Rose is played by french actress Cecile Aubry. She’s a captured English woman who believes Ty is the man she has been foretold of that will return her safely to England. This creates problems between Hawkins, Ty and what Welles’ conqueror may be capable of if they desert his army of barbarians. Could there be a jealous line between Hawkins and Ty over Aubry? If there is who do you think Aubry is going to wind up with?

There is plenty of action down the stretch as the plot plays out the way one would expect in an adventure starring one of Hollywood’s famed swordsman. The problems are not so much in the performances as with the script. The film jumps from the Saxons and Normans and how Ty has become estranged  to the far east where Welles plays a central figure. It’s just not done smoothly. 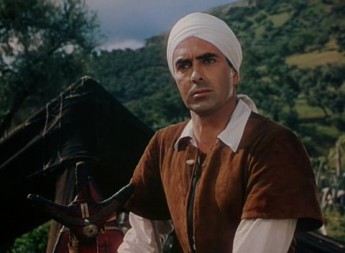 All the talent is here from the cast which also includes Finlay Currie and a young Laurence Harvey to the men behind the camera. Henry Hathaway directed and Jack Cardiff was the director of photography. All of the people involved here should have added up to a better showing overall. As it is it’s just passable fare.

Hathaway and Ty would do much better with their next effort in 1951. Rawhide. A solid western that plays out in a rugged style. They had also worked together as early as 1940 on Johnny Apollo and Brigham Young. Diplomatic Courier would be there final teaming in ’52.